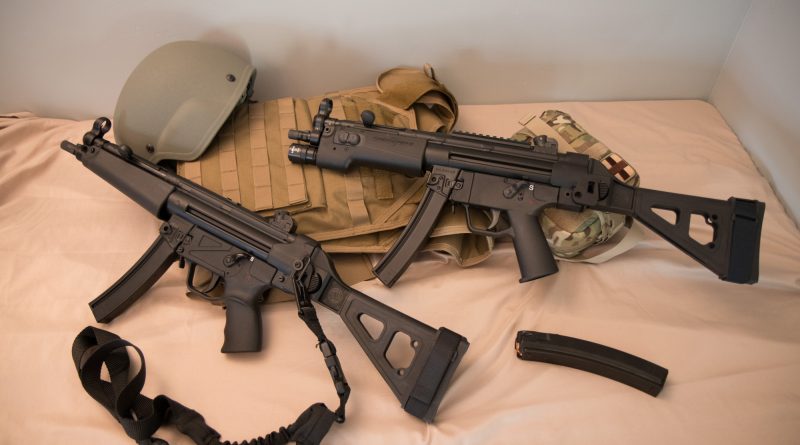 At the end of the Second World War the Mauser factory in Orberndorf Germany was destroyed. Mauser engineers, Edmund Heckler, Theodor Koch and Alex Seidel returned and from the ashes they created one of the most iconic arms manufacturers of the 20th Century: Heckler and Koch. H und K’s most successful design, by far the MP5 series. Lets take a look at the rollerlock design and how the MP5 became king of the hill.

Mauser engineers had been working on a new Assault Rifle during the later part of World War Two. The new rifle was dubbed the STG-45 or Sturm Gewer 45. The rifle fired the same 8mm Kurz cartridge as the STG-44, but it was designed to be cheaper to produce.

The STG-45 never saw production, but the design went on to become the Spanish CETME. HK updated and refined the design into the Granddaddy of all HK roller locking guns: The G3.

HK’s Roller Locking design was first used to compete for a German military infantry rifle contract. The G3 is one of the last battle rifles. It incorporates the pistol grip and magazine layout of most modern rifles, but still fires the full power 7.62 NATO Cartridge.

The G3 has served the German Army since the 1950s and is still in limited use today. The G3 has seen conflicts around the world. US Navy Seals carried G3s through the jungles of Vietnam. It’s been built under license by Greece, Turkey and others.

The G3 is truly the basis for all other HK roller lock guns. I was going to go shooting with friends, when I produced my PTR91(a semiautomatic G3) my friend exclaimed “It’s a giant MP5!” A more accurate statement would be that the MP5 is just a miniature G3.

The G3, MP5 and all HK roller lock guns operate on the principle of Delayed Blowback. Delayed Blowback, means the high pressure gasses pushing the bullet down the barrel also push the bolt back. This is Newtonian Physics, for every action there is an equal and opposite reaction. Because the G3 uses a high pressure rifle cartridge, the action cannot be allowed to blowback freely. Two rollers in the bolt head lock into the Barrel Trunnion and impede the rearward motion of the bolt enough that the bullet has left the barrel and pressure is dropping by the time the case is extracted.

The roller lock guns use fluted chambers, this means during firing the case floats on a layer of high pressure propellant gas. This makes tell tale flute marks on the cases. The cases also extract with authority. It is not unusual to see a G3 or HK91 throw cases 30 feet. The roller lock system means, no gas pistons, no gas ports or tubes.

In the 1960s Hk started working on a submachinegun variant of the G3. This would come to be known as the MP5, Machinenpistole 5. Adapting the roller lock design to the 9mm cartridge resulted in an amazing firearm. The roller delayed blowback resulted in extremely controllable recoil. Firing the MP5 in full-auto is quite simply amazing.

The MP5 would become one of the most prolific counter terror submachine guns ever. Its compact size and controllability make the MP5 ideal for Close Quarter Battle and Hostage Rescue.

The MP5 is in a unique position. It’s 9mm cartridge is optimized by the MP5s 8.9 inch barrel. Competing rifle cartridge based weapons loose a lot of their power in a cut down variant, while the MP5 is making the most of its cartridge. Other 9mm subguns have to have heavy bolts to take advantage of their blowback actions. The MP5s delayed system means the bolt can remain light which makes the recoil even lighter.

The MP5 is the standard by which all others are measured. It is the paragon. Every time a new submachine gun comes out, it is compared to the MP5. While many SWAT teams have incorporated 10.5″ AR15s, it is not without cost. A 10″ AR is LOUD! Also, full-auto AR15s are far from the controllable MP5.

The G3 has proven track record as a capable battle rifle. Its .308 cartridge is powerful and has long range. If you are looking for a semiauto rifle with decent power the G3 is a good place to start.

Most basic semiauto versions are set up with military profile barrels, so they are lighter than the more costly target versions. The rifle is robust and reliable.

As far as the MP5 goes, this is a great crap hits the fan weapon. Even in semiauto the MP5 is ideally suited for CQB. Ammunition is plentiful. The MP5 is robustly designed and it likes hot ammo. 124 grain 9mm NATO subgun ammo can be had at Walmart these days. If you need personal protection ammo MP5s are designed with +p in mind.

The dedicated survivor has choices to make. Roller lock guns are one of those interesting items that have commanded premium prices in the past. A genuine HK91 in decent condition will cost you over $3000. PTR makes quality G3 derivative rifles which have comparable prices to AR15s. Twenty round magazines can still be found for under $10.

When it comes down to it, if you are looking for a tough .308 battle rifle for preparedness, the G3 is now an economical choice. PTR also makes 7.62 Soviet versions that accept AK magazines.

What about the MP5? Well that is a different story. A semiauto HK94 with a 16 inch barrel can cost upward of five grand. But… and this is a big “but.” There are options. Zenith is importing HK spec MP5 Pistols. The Z-5RS with its 8.9 inch barrel, and the Z-5P with it’s 5 inch PDW barrel.

PTR is making MP5s in both full size and compact configurations. Omega is making MP5s and Palmetto State Armory has indicated they will be producing MP5s as well. Prices are higher than their .308 counter parts, but they are available.

HKs Delayed Blowback system is a proven design. It has served soldiers and police officers for decades. The MP5 or G3 will serve you well if you choose to incorporate them into your preparedness paradigm.