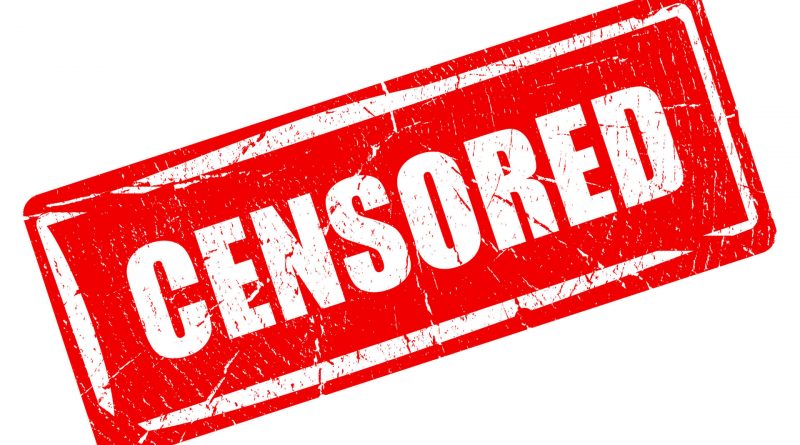 Coordinated censorship is the main evidence of a conspiracy against freedom at the highest levels in America. 2020 appears to be the year that the criminal syndicate that rules us has decided to unmask itself via overt and blatant censorship. Clearly the mainstream media has exposed itself as the propaganda arm of the oligarchy and the government has exposed itself as its enforcement arm.

When this happened in Russia and China during the 20th century, the next step was social cleansing. The problem is that the oligarchy can’t have millions of people who disagree running free. Hence somewhere between 60 and 200 million were killed by those regimes as they executed their thought control programs.

This activity used to be more hidden, but now it is clear that we are dealing with a not-so-secret combination. See the Websters 1828 1st definition of “combination” –

1. Intimate union, or association of two or more persons or things, by set purpose or agreement, for effecting some object, by joint operation; in a good sense, when the object is laudable; in an ill sense, when it is illegal or iniquitous. It is sometimes equivalent to league, or to conspiracy. We say, a combination of men to overthrow government, or a combination to resist oppression.

In other words, we have a serious conspiracy on our hands. This is not a baseless theory. Coordinated censorship is clear and unambiguous evidence

Coronavirus: Coordinated censorship of dissenting medical professionals is clear evidence of nefarious cartel-like activity. Regardless of what you may think about the SARS-COV2 (bad cold) virus going around it is becoming more and more clear that governments should have remained uninvolved. The authorities (especially including the mainstream news media) have behaved capriciously and oppressively at best. At worst they have engaged in an intentionally nefarious campaign to destroy our society, economy and liberty.

What you will find below is evidence of the massive amount of disagreement that scientists and medical professionals have with the mainstream media and government on this issue.  So far over 50,000 credentialed professionals have signed a document called the Great Barrington Declaration expressing their (censored) “grave” concerns about the state’s abusive response to this issue.

In summary they agree that state intervention should end immediately and people should resume normal life as soon as possible. They recommend voluntary measures for those at risk, and that any public health response should be focused on those at risk only. (i.e. the very elderly)

As infectious disease epidemiologists and public health scientists we have grave concerns about the damaging physical and mental health impacts of the prevailing COVID-19 policies, and recommend an approach we call Focused Protection.

Coming from both the left and right, and around the world, we have devoted our careers to protecting people. Current lockdown policies are producing devastating effects on short and long-term public health.

This information was summarily censored and discredited by corporate news outlets. The rational person would want to consider it, unencumbered.

Other notable medical experts who have been censored are Doctors Dan Erickson and Artin Massihi of Bakersfield California. They run several medical clinics in Bakersfield California. In the press conference they held at the behest of local TV stations, they correctly pointed out that our response to this pandemic has been in direct contradiction to the last 200 years of accepted immunology science and that the data was proving the public response to be entirely wrong. They astutely pointed out that “we always quarantine the sick and not the healthy.” They were then summarily censored and removed from YouTube and various other official outlets. They were also widely castigated. Eerily, if you search for Dan Erickson on youtube, all you find are pundits rebutting him. The uninformed is left to wonder what heinous un-truths Dr. Dan Erickson was spreading.

Select quotes from the press conference: “We always quarantine the sick … not the healthy. “, “… widespread infection similar to flu … I’m following the science. “, “… death rate less than the flu.”, “This is immunology and microbiology 101. Together we have 40 years of experience in this.”, “OK FINE… SHUT IT DOWN… BUT YOU HAVE TO ASK YOURSELF… WE’VE NEVER RESPONDED THIS WAY IN THE HISTORY OF THE COUNTRY. WHY ARE WE DOING IT NOW???”, “I don’t want to hide in my home and then develop a weak immune system… As soon as you hear the word ‘safe,’ that means control.”

Race Issues and Riots and Cancel Culture: One exceptionally egregious example of weaponized cancel culture was when the Nursing Dean of the University of Massachusetts, Dr. Leslie Neal-Boylan, was fired for saying that “Everyone’s life matters” in an email to her associates and students.

“I despair for our future as a nation if we do not stand up against violence against anyone. BLACK LIVES MATTER, but also, EVERYONE’S LIFE MATTERS. … No one should have to live in fear that they will be targeted for how they look or what they believe.”

Neal-Boylan appears to be a vibrant and compassionate grandmotherly type, perhaps a modern Florence Nightingale. And surely her intention was to bring people together with compassion for all. She continued her email urging that students should “care for everyone regardless of race, creed, color, religion, ethnicity, ability or gender preference.”

IMPORTANT NOTE: To assail someone for saying that “all lives matter” is an affront against reason itself. The only reason to do it would be because you intend to cause a shooting war. The idea that all lives matter is a self-evident truth.

Needless to say, innumerable people have been censored in media and commerce over the race issue in the last year.

Election Fraud: Besides material skeptical of vaccines, i.e. questioning their safety and effectiveness, perhaps the most censored topic in the last six months is whether there was widespread election fraud installing Biden in the White House. “The lady doth protest too much, methinks.”

The corporate media has engaged in a broad and sharp campaign to discredit and shout down anyone who won’t acquiesce to their narrative. All evidences of election fraud are labeled as “baseless allegations.” However, the evidence is clear and copious that the election was stolen. Here are links to some of that evidence:

The above links shed light on the vast evidence of probable fraud. However, we also must grapple with the issue that many rogue state officials simply disregarded their own voting laws, which were set in place specifically to stop mail-in ballot fraud. This paved the way for much of the vote fraud described in the affidavits and testimony referenced in the above links. Unfortunately the U.S. Supreme Court (to its shame) declined to rule on these blatant abrogations of state law when the state of Texas brought suit.

This article explains the issue clearly and succinctly. Please read it. We are left to wonder how any national election can be legitimate when that kind of fraud is allowable in other states. You wouldn’t do business with people engaged in that kind of illegality. Why should any given state continue to participate in a union so economically massive and taxing such as the United States of America when it’s supposed business partners are so blatantly corrupt?

Significant violations of election law that were put into place to protect against election fraud is sufficient to invalidate the results of the elections, apart from whatever evidence is able to be gathered in a short time to show actual numbers of fraudulent ballots.  Reason would indicate that there is a high number of fraudulent ballots that are impossible to identify, which is why the election laws pertaining to mail-in ballots were established to begin with.

Discussing the election fraud issue with the wrong bias will get you quickly censored and discredited by the corporate/statist machine.

January 6th 2021 Protest: In the wake of the “storming” of the U.S. Capitol building on January 6th, the state/corporate oligarchy undertook extraordinary steps to silence all dissent and brand all such dissent as “domestic terrorism.” Tens (perhaps hundreds) of thousands of non-statist individuals and businesses/organizations have been kicked off of their favorite social media, or deplatformed from hosting or banking services, or even have been fires from their jobs.

The most brazen example of this was when Apple, Google and Amazon coordinated to deplatform the Parler social media app, a Facebook alternative. They were getting close to having 15 million user accounts. And would have had many millions more… tens of millions more maybe … as everyone is waking up to the censorship. And most importantly, Parler was the main place to which people who had something to say about the January 6th events were flocking (by the millions). When Amazon kicked them off of their AWS hosting service without proper notice they essentially shut all of those people down instantaneosly

They all worked together to make sure at the same time we would lose access to, not only our apps, but they’re also shutting all of our servers off tonight, off the Internet,” said Matze. “They made an attempt to not only kill the apps, but also destroy the entire company. And it’s not just these three companies, every vendor from text message services, to email providers, to our lawyers, all ditched us, too, on the same day.”

This type of behavior is the modern equivalent of the Bolsheviks (in Russian Bolshevik means majority) “burning villages, confiscating livestock and executing peasants by the hundreds.” https://en.wikipedia.org/wiki/Green_armies … if allowed to continue it will play out in a more literal repeat.

Note: This article by J. Michael Waller is one of the best primary source accounts of what happened at the capitol. Waller is “a Senior Analyst for Strategy at the Center for Security Policy. His areas of concentration are propaganda, political warfare, psychological warfare, and subversion.”

What can we do about censorship?

Members of societies that are actually free have not only the purported “right” but the ability to express themselves without the type of coordinated interference we are seeing today. We must admit the system has turned against us and carefully seek out and assess the material that is being censored. It is obviously of vital interest to the public and likely damaging to the controlling, statist narrative of the corporate/state machine.

Please first seek out the truth, understanding it is not going to come from the mainstream or show up obviously in the first set of search results. Then, in a careful and diplomatic manner, help your circles understand the actual reality so that they will have some mental foundation upon which to operate in the face of the manipulative and fear-inducing propaganda which is almost universal in corporate media and large corporations that we depend on for food, travel, and other basic services.