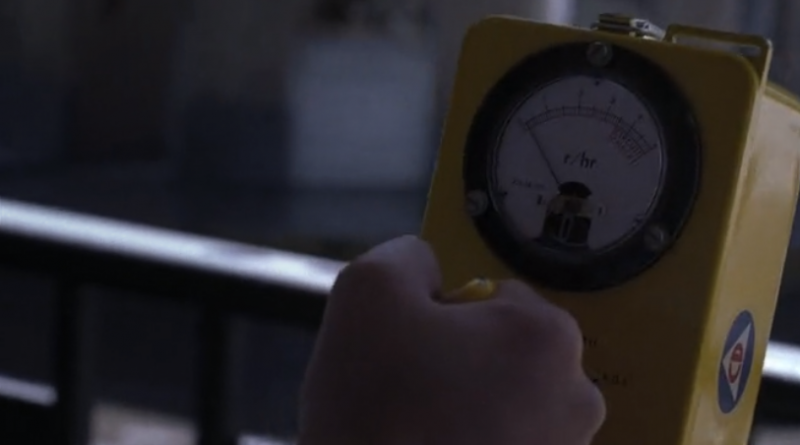 Jericho has gained a cult following in prepper popular culture. The series is set in a small town, “Jericho, Kansas.” The rural serenity is shattered when Jericho’s citizens witness the horror of an atomic fireball rising on the horizon. The series follows the people of Jericho as they deal with the nuclear attack. In this article, I’ll discuss a few of the plot points. We’ll go over the real preparedness concerns as well as Hollywood fluff. Read our analysis of episodes 1 & 2 here.

The episode begins with Robert Hawkins donning a gas mask and coveralls. The rest of the town is sheltering due to the potentially radioactive rain. He drives a box truck to a storage unit and walks inside. The action moves to Richmond Ranch where Jake and Emily are sheltering with Bonnie Richmond and the two rescued deputies.

Stanley states he was caring for livestock and was caught in the rain. April tells Jake, Stanley needs to drink antiseptic iodine. Jake throws the iodine to Stanley, and Stanley drinks it. Stanley tells Jake that he saw a column of tanks headed toward Denver.

We discover that school teacher, Scott Rennie, is having a panic attack in the salt mine. He rants “I gotta get out of here!” Gray Anderson and Shep Cale take Scott to another part of the mine.

Jake and Johnston discuss plans to send people out to gather information about the attack. Gail and Johnston discuss duck and cover while they wait at Jericho’s Town Hall. Gail mentions she was wondering: “did they have enough time to hide under their desks? It’s pretty stupid huh?”

Back at the Richmond’s Stanley tells Jake he is feeling sick. The Rain lets up and people exit their shelters. Eric green is seen with a survey meter checking for radiation. Stanley goes to the clinic, and Jake heads to the mine.

We see firefighters and the Green brothers enter the mine to rescue those sheltering. Gray and Shep appear with Mr. Rennie’s now lifeless body.

Jake rushes to the clinic to check on Stanley. Stanley is in good spirits and states that he was sick because he drank antiseptic iodine. School teacher, Heather Lisinski, asks April why Mr. Rennie died. April replies that Scott appeared to have died of a heart attack.

Jake takes charge of organizing Jericho’s efforts get information about the attack. Emily and Jake plan to head South to Wichita. Gray dubs those leaving the city “the Four Horsemen of the Apocalypse.”

Eric arrives at the local bar in time to see a short transmission on the TV. An Asian man in a News type broadcast is seen with a map of the United States along with red dots, apparent attack locations.

People become worried that the US is at war. The search group shrinks, as two of the men opt out. Emily backs out, fearing that Wichita has been attacked as well. Dale Turner returns to the supermarket finding the shelves empty. The power is off and food is about to go bad.

Shep volunteers to go to Denver to get information. Heather gets a letter from Shep. Shep laments that Rennie died in the mine, and said that he was responsible because he never called a doctor to check on him.

Jake finds a couple planes on the highway and returns to Jericho with the flight data recorder as the town is preparing to eat the perishable food.

The episode closes with Dale Turner locating supplies in a freight train that has crashed into a car.

Preparation is a big concern. Robert Hawkins demonstrates that he has some preparedness. The gear and guns clearly demonstrate he is more ready than most for what is happening.

Contrast Hawkins with Stanley Richmond. Stanley was caught out in the rain and potentially exposed to deadly radiation. The scenario where he has to care for livestock AND shelter himself from radioactive fallout had not occurred to him.

Iodine… more on that later.

Scott Rennie’s breakdown is a concerning and real problem. Mindset is a an important tool for survival. The true panic that Mr. Rennie displayed is a danger to himself and others. That type of panic steals resources because someone has to take care of Rennie as he panics.

The question arises, what can be done for folks like Mr. Rennie? First of all people like Mr. Rennie need to help themselves, his lack of preparedness contributed to his issue. He found himself in a situation outside his control, and then lost control of himself. Even a competent person with steel resolve can be effected by a person who does not have the same resolve.

The use of a Survey Meter would be wise. Items like this would be important to have on hand.

Knowing the extent of a crisis would be important information. A town would benefit by gathering intelligence. The act of leaving the town is accurately described a dangerous mission.

Eating food before it goes bad is a great idea. Food scarcity would be probable after an incident like this, better to get some nutrition rather than loose the food to rot.

The reason people shelter underground is because dirt and building materials block radiation. If your shelter is good enough to protect you from radiation, a hand held radio is not going to transmit through the shielding. The use of radios between shelters is unlikely without large external antennas.

Gail’s comments about Duck and Cover: This is one of those points where the nuclear disarmament folks have done an excellent job of promoting misinformation. Duck and Cover works! Is it a guarantee? No, and nothing is 100%, but it is an important skill for surviving nuclear attack. (Click here to read my article on Duck and Cover!)

People probably would not be able to leave their shelters as quickly as they did in this episode. But we can’t have them staying in there for days now… that would be boring.

There is a fair amount of pushing the plot forward in this episode, from the 55 gallon drum to locating the black box from the crashed airplane. When I watched this the first time I was dying to know what Hawkins was up to though!

Another interesting episode. A few things to consider, especially mindset and ability to shelter. I still love the Jericho TV Show, even years later. What a great show.