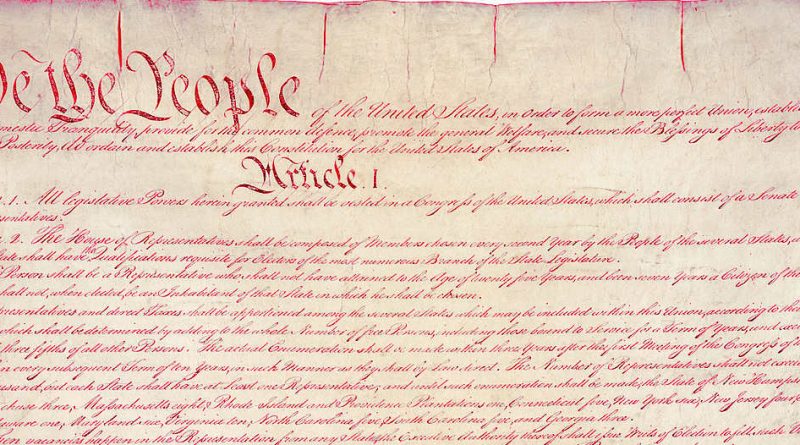 Lawmakers are causing a stir across the nation as they consider enacting so-called “Red Flag Laws” or gun confiscation risk protection orders. These laws generally set in place an unconstitutional legal framework to deprive individuals who have not committed any crime of their firearms without due process of law. The idea is that anyone, a neighbor, friend, family member, or even an online acquaintance can complain to the authorities that someone is a danger to others and the authorities can confiscate that person’s firearms without any sort of opportunity for the person to first defend them self in court.

In fact, the idea that the accuser has any real relationship or knowledge of the individual in question is largely irrelevant. The accuser has to simply make the accusation, according to their sensibilities of course, that the gun owner is a danger to others. Essentially these laws provide a pseudo legal framework and protection for a practice similar to “swatting.” “Swatting is a criminal harassment tactic of deceiving an emergency service (via such means as hoaxing an emergency services dispatcher) into sending a police and emergency service response team to another person’s address.” (Wikipedia)

Red flag laws are unnecessary and misleading, and the reasoning behind them is flawed. In the United States there is a standard in place that the state must meet prior to taking action against an individual. This standard is probable cause.

Probable cause is the standard by which police authorities have reason to obtain a warrant for the arrest of a suspected criminal or the issuing of a search warrant. It is also the standard by which grand juries issue criminal indictments. The principle behind the standard is to limit the power of authorities to perform random or abusive searches (unlawful search and seizure), and to promote lawful evidence gathering and procedural form during criminal arrest and prosecution. The standard also applies to personal or property searches.

The redundancy here in the case of so-called “risk protection orders” or red flag laws is that laws already exist that allow Law Enforcement to seize a person where probable cause exists to believe that person is a danger to themselves or others. Yes to seize the person. You have to have a “good reason” to seize a person (i.e. take them into state custody), and that good reason is probable cause.

The big, BIG, INCREDIBLY HUGE, logical and legal problem being overlooked in this discussion is that if a person is an actual danger to others, then seizing their guns is not an adequate response in ANY sense. Our custom in this country dictates that the dangerous individual needs to be removed from society in order that they be unable to perpetrate the harm anticipated.

Most definitely we have witnessed incidents where items other than guns have been used to injure and kill numerous people at a time. For example, in Japan recently a deranged individual set fire to an animation studio, killing 33 people and shocking the entire world. Also in recent memory, a man killed 8 people by running them over in rental truck in New York City. Vehicles have been used to kill multiple people in numerous recent incidents. So clearly guns are not the problem. The deranged individual is the problem. AND THE POINT IS THAT WE (EVERY STATE) ALREADY HAVE LEGAL PROCESSES TO DEAL WITH THESE SITUATIONS.

If a family member or friend reports a person as being a danger to themselves or others the police will evaluate the situation and determine if there is supportable probable cause. if this standard is met they will seize the person and take them to the hospital. At the hospital the police submit their probable cause and the person in question is then evaluated by doctors who have the opportunity to determine if the person is in deed a danger to themselves or others. The doctors then have their opportunity to present this to the court. A person can be certified as mentally defective through the due process of law. Generally the state has 72 hours to make their case.

At this point if the person is certified as mentally defective they become a restricted person just like a felon, and it then becomes ILLEGAL for them to possess or purchase firearms.

The enemies of freedom attempting to rule this country desire a system where anyone can go to court and accuse another person of being a danger to themselves or others without that accused person being present. The controllers will then be able to force the police to confiscate guns from the accused after the order has been granted. After the accused has been served the order and their guns confiscated, a hearing will be held weeks or months later to determine if a long term order should be granted. However it remains to be seen how successful the innocent will be at getting their stolen property back from the state authorities.

Let us not forget that we live in a digital society. It’s one where everything a person has ever posted either online or perhaps even written and sent in private can easily be preserved forever. The massive social-media and technology giants have become increasingly statist and most certainly anti-gun. Is it not possible that statements made or ideas written long ago could come back to haunt law-abiding individuals? … especially when the burden of proof is so low. And what if the political winds shift. Or if they blow even stronger against freedom-loving Americans? We most certainly have entered the era of thought crime.

We’ve reached a point in society where backward logic has become common. The reason you can tell that Red flag laws are about gun confiscation and NOT public safety is as follows. Red flag laws claim to be about taking a homicidal or suicidal person’s guns, removing the danger. But they don’t remove the danger, because a suicidal person still has ropes, extension cords, razor blades, pills and high buildings with which they can kill themselves. A homicidal person is still in society and can access automobiles, fire, blunt objects, knives etc…

So if this person is a danger, why are we not seizing them? The answer is clear. Those who desire to rule us more easily wish to create a system where a lower standard can be used to seize guns from a person prior to due process. Remember that good reason the state had to have to seize a person: Probable Cause?

Those who have been convinced that red flag laws will stop violence have been duped into believing a fallacy. If a person was actually dangerous we’d need to seize them, not their guns. But anti-gunners want to be able to operate on suspicion rather than probable cause, and they are suspicious of all gun owners. The vast majority of American gun owners are the types of people that the tyrannical state fears because they are the types of people who ultimately may take action if the state overreaches too far.

Protective orders already create a situation where a person can get an ex-parte order and a person can loose rights prior to due process, and this system is rife with abuse. While it is illegal to falsely request such an order, I have never heard of someone being prosecuted for making false statements to obtain an order. There was a notable case in Utah where a spurned wife attempted to ruin her Gun-Rights Lobbyist, and Firearms Instructor husband by obtaining such an order. The husband prevailed in court, only after the ex-parte order was granted temporarily. No charges for the wife.

Why did you let them out?

When a person is arrested, the court can deny bail if certain circumstances are met. When a person is seized and submitted for evaluation they also can be kept if circumstances are correct. It is concerning to me that the left would rather release dangerous felons and dangerous mental patients while reducing the rights of honest folks to defend themselves. Furthermore they’d like to lump honest folk into the same group by lowering the standard for seizing their guns. In the last few decades, the controlled media has increasingly painted gun owners as lunatic fringe and dangerous. It’s clear that the anti-gun agenda is progressing.

I ask this question: If a person is a legitimate danger to society, why should we let them out of prison or the mental hospital? The fact of the matter is that the gun grabbing controller class sees a criminal and an honest citizen in the same light. An honest citizen who kills an assailant is the same as a drug dealer who murders someone in the eyes of a gun grabber. Yes, they’d rather see a woman strangled to death than see an empowered peasant effectively defending her own life. They even read the names of criminals killed by police or citizens at vigils for the victims of gun violence in order to keep the waters muddy.

By any means necessary.

The fact of the matter is this: Gun grabbers want your guns by any means necessary. They desire that the 2nd amendment die a death by a thousand cuts. They never relent or compromise their position but insist gun owners compromise theirs. When two ultra leftist terrorists go on a rampage, gun grabbers blame honest gun owners. It is lunacy to let ultra statists dictate policy when members of their groups are fomenting the violence.

Red flag laws are not about public safety. They are about lowering standards for government action and removing due process. If you had a good reason to take someone’s guns you’d already have a good reason to seize them under current laws! But that’s not what gun grabbers want. They want a law that lets them seize guns without a good reason. Those enemies of freedom attempting to rule us doe not want to adhere to a probable cause standard. They want a possible cause standard. And EVERYONE is possibly dangerous.

Please use your influence to educate others about how the passage of red flag laws is an incredible danger to law and order in this country. They are obviously legally redundant. The will be ineffective at stopping violence and are only likely to cause more violence between honest people and the police who are required to enforce such dubious legal actions. Red flag laws clearly create a chilling effect and stifle freedom of speech. Considering our polarizing, conflict-driven media, if passed nationally, such laws could frame fully one half of the country to be perceived as dangerous. And in view of the fact that the venerable law-enforcement institutions of America have obviously been used as political weapons of intimidation and control (i.e. Russiagate) we must stand up and speak out now, before this goes to far.

P.S. Don’t even try to use these arguments as a basis for supporting a social credit scoring system to enable total control of an individual. Such an orwellian system is just the fallacy of red flag laws played out to it’s ultimate extent.