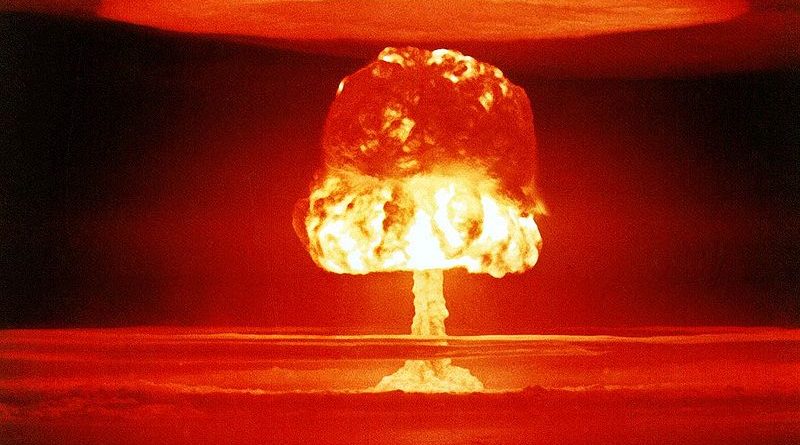 Atom Bomb/Atomic Weapon:
Any explosive device that uses reactions of atomic nuclei to generate the destructive force. Typically refers to fission bombs, but can refer to fusion bombs as well.

Ballistic Missile:
A large missile that travels a long distance on a ballistic, or parabolic trajectory. Ballistic missiles can deliver one or more warheads, generally on a predetermined target.

Blast Shelter:
A nuclear bomb shelter designed to protect the occupants from the effects of a nuclear blast, as well as the prompt radiation effects and heat.

Duck and Cover:
A technique for minimizing exposure to personnel during a Nuclear Attack.

Fallout:
Radioactive dust that is pulled into a nuclear weapon’s fireball and irradiated. This dust continues to fall to earth after a nuclear explosion and represents a radiation hazard.

Fallout Shelter:
A nuclear bomb shelter designed to protect the occupants from the effects of nuclear fallout.

Fireball:
The large glowing ball of ionized gasses and plasma created by an atomic weapon.

HEMP:
High-Altitude Electromagnetic Pulse. The effect generated by the detonation of atomic weapons at high altitude and it’s subsequent pulse of high energy radio waves. This effect is known to destroy and damage electronic equipment as well as interrupt radio communications.

Hydrogen Bomb:
A nuclear bomb that uses the energy created by fusing hydrogen atoms for destructive force. Hydrogen bombs use small fission bombs as the nuclear trigger to start the fusion reaction.

Implosion Bomb:
A fission bomb where specifically timed and shaped high explosive charges are used to compact a Plutonium or Uranium core for the purposes of creating a nuclear explosion.

IRBM:
Intermediate Range Ballistic Missile. A ballistic Missile for use at long ranges less than continental distances. Typically 1,800 to 3,400 Miles.

Kiloton:
A measure of explosive force when compared to TNT. 1 Kiloton represents the equivalent of 1,000 tons of TNT.

Megaton:
A measure of explosive force when compared to TNT. 1 Megaton represents the equivalent of 1,000,000 tons of TNT.

MIRV:
Multiple Independently Targetable Re-entry Vehicles. Refers to the capability of some ICBMs to carry multiple warheads capable of engaging multiple targets after the warheads re-enter the atmosphere.

Mushroom Cloud:
The large cloud of radioactive dust and smoke formed when a nuclear blast’s fireball cools after irradiating particles sucked into the fireball by vacuum pressure.

Neutron Bomb:
A low yield nuclear explosive that is engineered to have greater immediate release of neutron radiation at the time of detonation.

Nuclear Bomb/Nuclear Weapon:
Any explosive device that uses reactions of atomic nuclei to generate the destructive force. Generally refers to all nuclear explosives.

Nuclear Fission:
A nuclear reaction by which the nucleus of an atom is split into smaller atoms.

Nuclear Fusion:
A nuclear reaction by which atoms are joined into larger atoms.

Nuke:
Generic term for all nuclear weapons. Eg “Nuke’em” or “China has nukes.”

Plutonium:
A heavy metal with radioactive properties. Plutonium with the atomic weight of 239 is useful for the construction of nuclear weapons.

Prompt Radiation:
The immediate release of ionizing electromagnetic radiation created by a nuclear explosion. This radiation can be immediately harmful or fatal to living organisms. While hazardous or fatal, the prompt radiation is generally not as harmful as the blast and thermal effects from a nuclear weapon.

Nuclear Blackout:
An area of significant to absolute radio signal obstruction created by radioactive particles after a nuclear explosion.

Radioflash:
Another term for EMP.

Thermal Effects:
The significant portion of a nuclear weapon’s energy that is released as thermal radiation or heat. Thermal effects can be responsible for structural fires and severe to fatal burns on victims.

Uranium:
A heavy metal with radioactive properties: Uranium with the atomic weight of of 235 is useful for the construction of nuclear weapons.