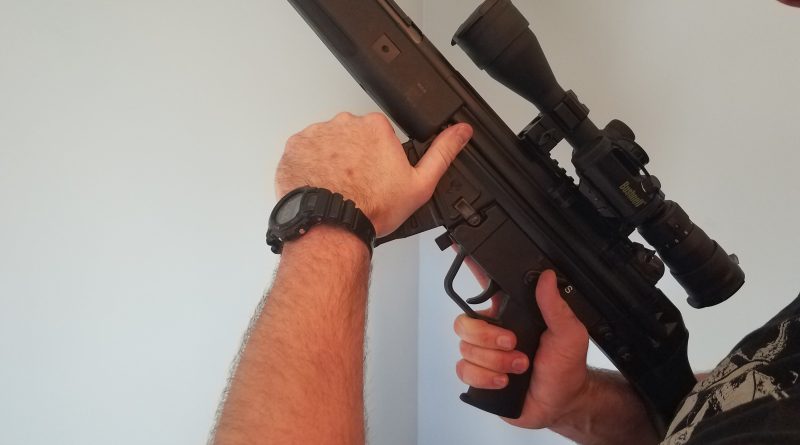 The HK91 is one of the serious attempts to bring a highly capable tactical rifle to the civilian market. The Tac Latch is a great upgrade to this system. Yeah, we’ve heard it, “HK. because you suck and we hate you.” I’ll admit that article was hilarious, and the author is a good guy to boot. But lets be fair HK wants to sell you guns. They have been trying hard to sell you guns for a long time. Prior to the 1989 ban, HK was importing HK91s, HK93s, and HK94s as fast as they could. They strongly opposed the ban and tried to bolster the opposition, to no avail. After the ban they imported SP89 pistols until they too were banned in 1994.

Between the United States’ import laws, and Germany’s current export laws, HK has a hard time importing long guns into the US. Back in the day the HK91 was about the most hardcore tactical rifle you could get.

One of the limitations of the system was how HK designed the gun to be incompatible with its military counterpart, the G3. They made the trigger housing attach to the receiver via a shelf rather than the typical pin hole. The pin whole was part of the G3’s paddle magazine release. The paddle was omitted from the HK91. This left the push button release, which was just further away from the finger than the AR15s. The button has always been a little hard to push, the paddle was easier to use.

The Tac Latch was designed to give right handed operators the option to use their left thumb like they would have if the rifle was equipped with a paddle. HK Parts has a video on assembling the Tac Latch which you should watch prior to installing the part. It should be noted there is a Tac Latch for PTR91s and one for HK91s as the design differs slightly at the mag catch.

The Tac Latch goes in easy enough. You’ll need a 3/32″ roll pin punch. HK Parts said our PTR91 magazine catch would be incompatible with the Tac Latch. Turns out OUR PTR91s had the correct part, even though we had obtained the HK91 style catch from another(cheaper) distributor. You’ll need to check your part for yourself.

First off make sure the rifle is unloaded. You then need to disassemble the rifle. Our Tipton gun vise came in handy. Tap out the roll pin, and disassembling the catch is pretty easy.

Installing the Tac Latch took some ingenuity. The spring is pretty strong and you cannot access it well with your fingers. It didn’t take too long but we got the parts together correctly.

The roll pin taps into the new button fairly easily. No hiccups on either rifle we upgraded. As soon as you have the part installed you’ll notice it probably feels a little stiff. This concern was fleeting. As soon as I got the rifle back together, I could tell mag changes are going to be quite a bit easier. The Tac Latch probably doesn’t get you ALL the functionality of the paddle, but it’s a big upgrade.

Another thing to note, the new mag button is slightly extended. This makes Left handed operation of the rifle easier as well. PTR now makes rifles with a fully functional paddle release. If you have an HK91, or an older PTR this is a good choice to increase the functionality, and tactical value of the rifle.