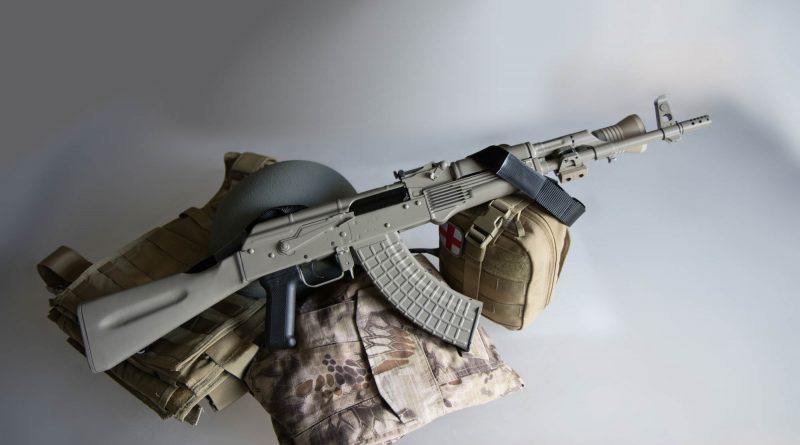 In 1947 Mikhail Kalashnikov designed the Avtomat Kalashnikova 47 or AK47. The Kalashnikov rifle has seen great world wide success due to its simple design and reliable operation. The AK47 family of rifles also includes the AKM, and AK74 rifles. The AKM is the most common type of AK rifle, due to its simplified manufacturing methods. The AK47 uses a milled steel receiver as apposed to the AKM, and AK74’s stamped steel receiver.

The 7.62 AKM is suitable rifle for the prepared individual because it is Reliable, Accurate, Powerful and well suited for Close Quarter Battle(CQB).

The AK47 is one of the first truly modern rifles. The rifle entered service as one of the first post war infantry rifles. The Kalashnikov operates on a piston driven gas system. The propellant gases drive the piston and bolt carrier to the rear with authority. The large gas port makes the whole system fairly over-gassed as a general rule.

The bolt carrier rides on a pair of robust rails. The bolt lock into the receiver via two large locking lugs. Most com-bloc AKs have hammer forged chrome lined barrels.

In 1974, the Soviet Union adopted a 5.45 x 39 mm cartridge, and the stamped receiver AK74M was the result. Sometimes folks will try to simplify the terminology into 7.62 AK47s and 5.45 AKMs. Because there are 7.62 stamped AKMs this tends to cause more confusion than it is worth. These days the rifles are usually referred to as “AKs” and then differentiated by caliber.

The 7.62 x 39mm Soviet cartridge is the most common cambering for the AK. Firing a 123 grain bullet at 2300 fps, the cartridge offers better penetration through most types of light cover than the 5.56 NATO cartridge.

Common 7.62 AKs are capable of accuracy between 1 MOA and 4 MOA depending on type. Yes I can hear the scoffing but there are 1 MOA AKs out there. As far as the more common 2-4 MOA rifles go, consider that 4 MOA is considered to be acceptable accuracy for USGI M4s.

One of the reasons that AKs are said to be inaccurate is due to the vastly different bullet trajectory of the Soviet 7.62 when compared to the NATO 5.56 cartridge. While the AK’s 7.62 cartridge is more powerful than the NATO cartridge is trajectory drops significantly more, making the 7.62 AK a 0-300 yard gun. Special attention should be made to Battle Sight Zeroing an AK. Understanding the trajectory and impact points at different ranges is important.

The Kalashnikov tends to receive criticism for it’s ergonomics and sights. Truly AK47’s sights and ergonomics are vastly different from the AR15. Does that make them bad?

People will often criticize the AK for having a short sight radius. It should be noted that the AK47 and AKM have a sight radius almost identical to the M4. The AR15 with it’s aperture sights typically makes for better target shooting accuracy. So why does the AK have such simple sights? The answer: Close Quarter Battle.

The AK47 was designed at a time when the Red Dot Sight was science fiction. The AK sight design is heavily based on combat use of the front sight. The AK’s front sight is as far forward as possible. In close quarters the user can simply focus on the front sight and make effective hits even if the shot is hastily aimed. This sighting style is sometimes called the “Caveman’s Red Dot” or “Caveman’s Eotech”

The AK47’s safety is often described with choice words like “Atrocious.” Most stock AKs come with a very tight safety that can be difficult to operate without removing your hand from the firing position. AK Operator’s Union has an excellent video  on how to adjust your AK’s safety for easy firing hand operation.

The AK has pretty comparable size and weight to the AR15. The AK especially in 7.62 has plenty of parts and accessories available. There are tons of surplus magazines and several domestic polymer options. The Circle 10 AK magazine is great, light and super tough.

Steel Cased Com-bloc ammo is widely found. The days of the $300 AK are gone, but you can still find quality at comparable prices with the AR15. Quality accessory rails easily obtained. If your AK has a scope mount, rail adapters and scopes abound.

If your looking for a proven system with more punch than the AR15, the 7.62 AK is a good choice. Sure .300 Blackout is more common than it used to be. The ballistics are very similar between Supersonic 300 Blackout and 7.62 Soviet. 7.62 Soviet is still very inexpensive. Sub $5 boxes of 20 are still common. The rifles may have similar prices to AR15s, but feeding them is cheaper.