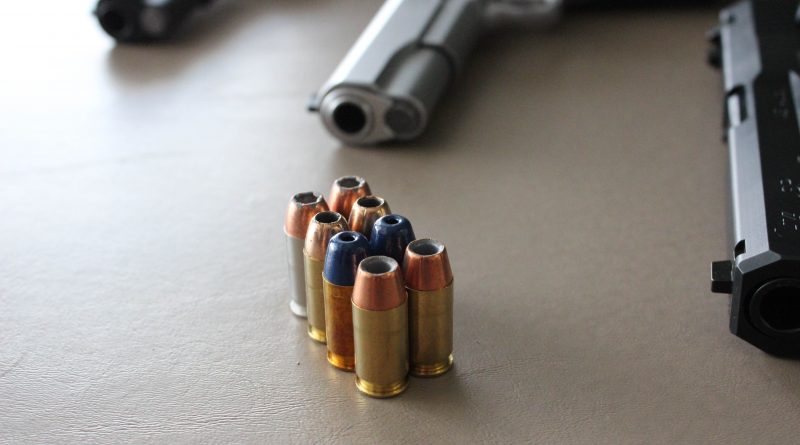 Designed in by John Moses Browning in 1904 the .45 Auto cartridge remains one of the most trusted self defense pistol cartridges in the world. For years the debate over .45 and 9mm has raged on gun forums. Today 9mm has secured acceptance as a worthy caliber. With this acceptance .45 has seen a bit of a decline in popularity. Regardless of this the .45 remains an effective cartridge with an impeccable service history.

.45 is the standard by which all other auto pistol cartridges are judged. The 1911 is responsible for some of the cartridge’s success. The 1911 is a smooth shooting platform that performed well with the chambered cartridge. This, paired with the good performance .45 shows with ball ammo, the .45 attained a reputation as an effective self defense cartridge.

when it comes down to it combat pistols have to perform. Some have observed that a 9mm may expand but a .45 will never shrink. This is a pretty apt point considering the mechanism which pistols rely on to inflict damage.

Pistols rely on the mechanic of punching a basic hole in the target. At pistol velocities the hydro-static shock and cavitation are insufficient to inflict substantially more incapacitating injury than the hole the bullet punches in a target.

Of course there are some pistols that push the envelop of this dynamic, however those guns are categorically identified as exotic. So considering that a typical pistol relies on the hole it makes, larger projectiles are desirable.

9mm projectiles have made a lot of improvements over the past 30 years. This point is often made when justifying choosing a 9mm. Ammunition manufacturers have applied those same innovations to .45 cartridges. A denim test of Winchester’s “Ranger T” .45 showed average penetration of 14.4″ and expansion of 1″… That is a pretty hard slam dunk on the FBI gel requirements.

A strong criticism of .45 is the magazine capacity of guns chambered in .45. Like the innovation in 9mm projectiles, many recent offerings in .45 have demonstrated increased capacity. The HK USP is a fantastic firearm that holds 12+1 in .45 Auto. But that’s just the beginning, Glock and FN exceed that. The FNX .45 comes standard with a 15 round magazine.

Again, the magazines for 9mms have improved as well and the point for most mag capacity still goes to 9mm.

Single stack magazines were the industry standard when the 1911 was designed. When you consider that the 1911’s competitors like the Luger were only beating it in capacity by one cartridge, the .45 projectile was a big deal, especially with ball ammo.

The .45 cartridge is successful beyond it’s initial offering in the 1911. It has found a home in numerous service pistols, sub-machine guns and carbines.

A wise man once said “Rifles are rifles, and pistols are pistols.” Yet, the .45 is still trucking along for those looking for a pistol caliber gun with a little extra thump.

The interesting thing about comparing .45 and 9mm is that they are really two competing paradigms. They are both viable service calibers, both arising from the turn of the 20th Century. The pros and cons between the cartridges aptly demonstrate that a design’s strength’s are often also it’s weaknesses. While 9mm has slightly less recoil and higher magazine capacities, these are gained by being smaller and punching smaller holes in a target. On the flipside the .45 punches bigger holes at the expense of capacity and recoil.

After 30 years in service .40 Smith & Wesson appears to be on its way out. The .45 still has it’s niche as THE Big Bore Service caliber.

I’ve heard folks dismiss the larger holes argument a number of times. Typically the argument is rightly that shot placement is the most important factor for bullet effectiveness. Then the argument wrongly turns to say that the increased cross-sectional area is not enough to effectively increase the likelihood of compensating for aim error or having the fortunate effect of striking an important blood vessel.

In my view .45 Auto punching a hole roughly twice the area of 9mm is a noteworthy advantage of the cartridge. Almost only counts in horse shoes and hand grenades. That being said .45 is punching larger holes in targets with a substantially greater footprint than 9mm.

.45 Auto has been protecting American service men since World War 1. It’s service history is second to none. It is a worthy addition to a preparedness paradigm. As always, Live Ready!