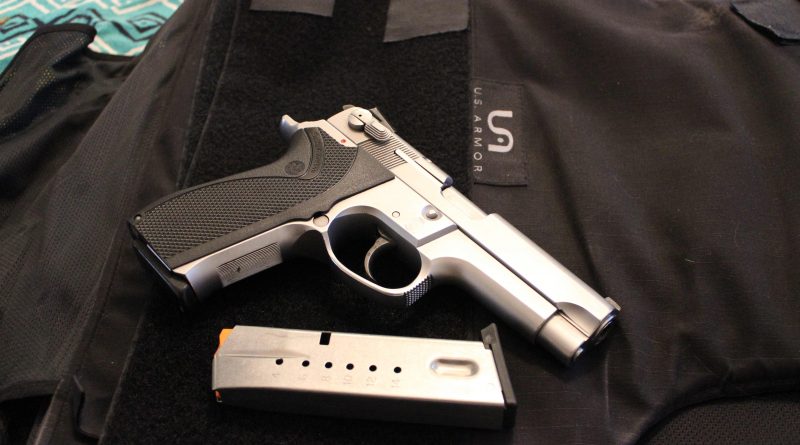 April 11, 1986 Miami, amidst the nation wide crime wave of the 80s, two murdering bank robbers were on a crime spree. If you want to see the face of evil do some research on Michael Lee Platt and William Russell Matix. The fact that people like this exist in the world is the reason most police officers are never unarmed, even off duty.

The two well armed robbers were engaged in a shootout with FBI agents who were attempting to apprehend these murderous felons. When the smoke cleared, the two felons were dead, five agents were seriously injured and two had been killed. There were a lot of gunfighting lessons learned in that gunfight, one thing had been settled outright: It was time for Law Enforcement to universally accept the semiautomatic pistol. The lack of revolver capacity and difficulty in reloads were seen as a a major contributor to injured agents that day.

Some agents had been armed with semiautomatics that day. Agent Grogan, and Agent Dove both were armed with Smith & Wesson 459 semi-auto pistols. The pair were closest to Platt during the shootout. Platt shot and killed both armed with a Mini-14 semi-auto rifle. Dove’s 459 was struck and disabled during the gunfight by a .223 bullet fired by Platt.

With the two semi-autos taken out of the fight as it began, the remaining agents lacked the firepower to immediately stop the two murdering bandits. As the firefight progressed Agents struggled to load single cartridges into blood covered revolvers.

Out of the Ashes…

Smith & Wesson has been arming American Lawmen for a long time. It is notable that every single agent in the Miami gunfight had been armed with at least one Smith & Wesson product.

The FBI was evaluating cartridges and wound ballistics desperately trying to learn from two dead agents, and five others wounded.

A debate had raged over autos and revolvers for decades. Smith & Wesson had been marketing both varieties. The Illinois State Police adopted the Smith & Wesson Model 39 in 1967. While autos were gaining popularity, first generation S&W 39s and double stack 59s would not feed hollow point ammunition reliably without modification.

The second generation Smith & Wesson autos were only produced from 1984-1988, these included the 459s used by agents during the shootout. These updated 59s were more reliable but aside internal modifications the guns the firearms are nearly identical.

Smith & Wesson re-designed their semiautomatics in the form of a 3rd generation of guns that would accommodate a number of calibers including 10mm which the FBI decided on for their new cartridge.

The 5906 was born, designed as a state of the art stone dependable auto, it’s heritage was clear. It bears resemblance to it’s predecessors the 59, and 459, but it is clearly a new generation of handgun.

The 5906 became Smith & Wesson’s flagship 9mm service pistol. 3rd generation Smith & Wesson’s are distinguished from previous generations by their four digit model numbers. There are a lot of other 3rd generation Smiths with different configurations, for example the 5904 with its blued carbon steel slide and aluminum frame, the 5903 is the same but with a stainless slide. The 5906 is the all stainless DA/SA with a slide mounted ambidextrous safety/decocker.

5906 handguns were used by police across the country. They were produced from 1989 to 2004 when the classic Smith & Wesson metal framed handgun line was discontinued.

The 5906 along with other 3rd generation Smiths has significant slide and frame redesigns that distinguish it from 2nd generation pistols. The barrel bushing is fixed in the slide and is not removable. The barrel has obvious taper that allows the barrel to be removed for cleaning and maintenance. The frame accommodates a wraparound grip that replaces the grip panels and dedicated mainspring housing from the previous generations.

The 5906 is a dream to shoot. Personally I prefer single action autos carried cocked and locked. Considering this is a double action the 5906 has a good double action trigger pull. The trigger is long but smooth. The single action pull is short and crisp. Trigger reset is short.

Recoil management is a dream, and it aught to be this gun is heavy, 38 oz! At the time of this article I have not been able to conduct benched accuracy testing for the 5906 I’m testing, however the practical accuracy is excellent. If I do my part I feel like it places the bullets exactly where I want them to go.

The 5906 entered production 30 years ago. It is a classic pistol with plenty of history riding in a lawman’s holster fighting crime. It is overbuilt and robust, it is also out of production.

If your looking to obtain a 5906 you’re gonna have to find one on the used market. A “nice” 5906 is gonna run you north of $500 used. There are plenty of 5906 police trade-ins out their. Live-Red-E’s test gun is one of these police used guns. When we got it it had rusted sights, and the grip was marred from repeated seat-belt buckle impacts.

It took a fair amount of scrubbing to get the pistol clean. The sighs needed some cold blue and paint, and I replaced the recoil spring, hammer spring and grip. The result is a pistol with plenty of life left in it, cause this thing is built to last. These well used 5906 pistols can be found in the $300-$350 range.

An Artifact of History.

Police used guns tend to have lots of holster wear, along with plenty of dings and scratches from bumping into things. Not only does the design have along history serving Law Enforcement through it’s 1st, 2nd and 3rd generations, but each police trade-in has a history. 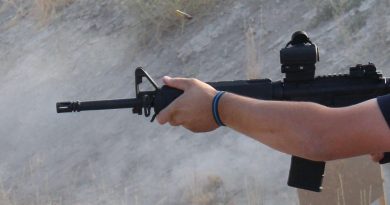