The world is filled with plastic striker fired pistols. The IWI Jericho 941 “F” stands out as modern steel, hammer fired, gun you carry cocked and locked

The Jericho 941 is Browning style design. The Jericho is a copy of the CZ-75, but with product improvements. The Pistol has the locking lugs on the top of the barrel in front of the hood. The frame mounted safety further identifies its Browning heritage.

The slide rides on rails inside the frame, just like the CZ. The Jericho’s slide has been redesigned to use a 1911 style retaining plate for the firing pin, rather than the roll pin like the CZ.

Improvements to the CZ design including beefing up the pistol to take the punishing .41 Action Express cartridge. Hence the name 941. The design called for a pistol that shoots 9x19mm or .41 Action Express with conversion only requiring a barrel, spring and mag swap.

.41 Action Express was a cartridge that fired a .410 projectile approaching the energy of 10mm Auto. The .41 AE cartridge had a rebated rim so that the same slide/breach face could be used to fire 9mm and .41 AE.

Lots of folks have pointed out that the Jericho shares a lot of features with the Tanfoglio line of pistols. Tanfoglio makes competition variants of the CZ-75 design. It appears that IMI used that variant as a starting point for the 941.

When you compare the Jericho with the standard CZ-75 a few things stand out. The Jericho comes standard with extended safety, slide catch and magazine release. The Jericho also has a full length dust cover and guide rod. It also has an excellent short single action trigger.

The race inspired features show the forward thinking of the IMI engineers who worked on the pistol. This is something we see more and more in combat pistols today.

One major advantage IMI had with incorporating the competition features was their position in making a gun that works right out of the box. You see a lot of cops running after market upgrades on Glocks these days. The issue with this is that throwing a bunch of upgraded parts from different manufacturers can lead to issues. You see more souped up Glocks fail at competition that stock guns hands down.

IMI incorporated those competition features but they are all stock. The gun is reliable. It has extended controls but they are not in the way. The pistol has been used by Israeli Armed Services since 1990. But the gun is not purely race inspired. The barrel is the heart of any firearm. The Jericho 941 is sporting a polygonal bore that is cold hammer forged from chrome vanadium steel.

The first thing you notice coming to the Jericho from a CZ is the grip. The 941’s grip is slimmer than the CZ. The redesign places the palm swell low on the grip for a more 1911-esque feel. The current pistols have a blade front sight with a sloped rear sight.

The textured plastic grips don’t give the greatest purchase, however the front and back straps are serrated which is a plus. The 9mm version with the steel frame has very little recoil so the grip surfaces are ok considering.

On a side note a big plus with steel guns like this is you can get some aftermarket grips. There are good micarta and G10 offerings for the Jericho as well.

In my opinnion the Jericho 941 ought to be run Cocked and Locked. It has a frame safety and a firing pin block.

Not all Jerichos are have the frame mounted safety and the steel frame. The Jericho 941 “R” is a steel gun with a slide mounted safety/decocker. The 941 R cannot be carried on safe with the hammer back. This means this Jericho has to be carried like a typical DA/SA gun.

For years the Jericho R was imported by Magnum Research as the “Baby Desert Eagle” pistol.

Polymer framed guns are out there too, and plenty of them. The frame on polymer Jericho’s is redesigned to accommodate the polymer paradigm and there are several design assemblies that do not interchange between polymer and steel guns.

The Jericho 941 is a solid combat handgun. The Steel “F” variant exemplifies a lot of the great features of classic steel combat arms, with the reliability of a modern auto. This pistol would make a great addition to any preparedness toolbox. As always, Live Ready! 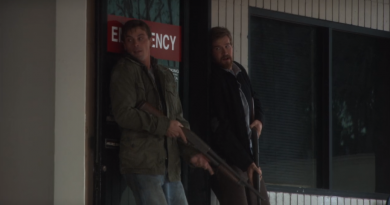