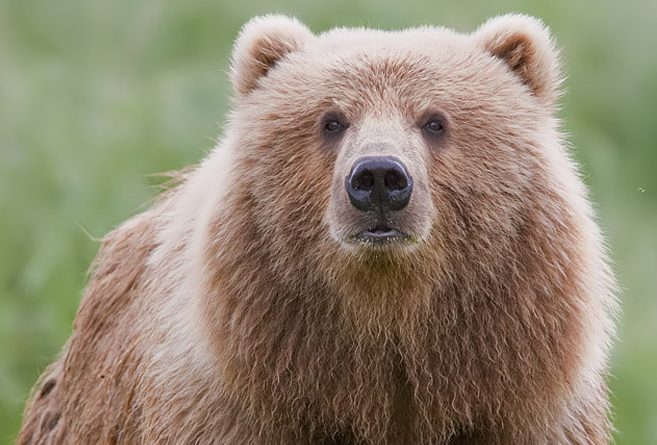 A quick internet search comparing Guns and Pepper Spray for bear defense will show numerous articles stating that Bear Spray is more effective than firearms. Numerous out door “experts” have also chimed in promoting spray over a firearm.  Most of these claims concerning how effective pepper spray is compared to a firearm stem from two well known studies from Brigham Young University’s Tom Smith.  The studies are aptly and respectively named “Efficacy of Bear Deterrent Spray in Alaska” and “Efficacy of Firearms for Bear Deterrence in Alaska.”  Generally the studies are touted as demonstrating that spray is about 92% effective while Handguns are only successful about 84% of the time, and long guns 76%.  The bear spray advocates usually state that gun users were injured in 50% of the incidents studied and spray users were only injured in 2% of studied incidents.

When these numbers are presented bear spray seems the clear choice. The bear lives, the bear spray user likely escapes unharmed everybody wins. Unfortunately when comparing the data it becomes clear that the studies are not a direct comparison of two methods for bear deterrence at all. It appears that most people commenting on the subject have not actually read the studies in question. We find this to be quite alarming considering this actually is a matter of life and death. Considering the efficacy of bear deterrents is a serious matter. Hunters and outdoorsmen generally make significant efforts to plan their ventures. And bear encounters are relatively uncommon, especially in the lower 48 states. Bear attacks are even less common. Ultimately you may decide to rely on bear spray but you should be aware of what really happened in these studies.

Unfortunately there are people who abhor firearms and firearms owners. There are also those who’d prefer if your bear encounter had to end in death– you should die rather than the bear.  Politically the use of these studies serves those folks.  A lot of hunters have jumped on the spray bandwagon as well, but the logic is flawed.  I don’t think the authors of the studies intended they be used to dissuade the carry and use of firearms for protection against bears, however in practice many folks are pushing just that. Unfortunately they appear to be having some success due to the fact that most people haven’t read the studies.

Bear actually WAS Sprayed versus Firearm NOT Deployed

Using these two studies to promote the use of pepper spray as the clear and only answer for addressing dangerous bears is problematic for two main reasons.  The first reason is the types of bear encounters in the studies appear to be drastically different.

We present a comprehensive look at a sample of bear spray incidents that occurred in Alaska, USA, from 1985 to 2006. We analyzed 83 bear spray incidents involving brown bears…, black bears …, and polar bears …. Of the 72 cases where persons sprayed bears to defend themselves…

We compiled, summarized, and reviewed 269 incidents of bear–human conﬂict involving ﬁrearms that occurred in Alaska during 1883–2009. Encounters involving brown bears… Additionally, we identiﬁed multiple reasons for ﬁrearms failing to stop an aggressive bear.

Source: Efficacy of Firearms for Bear Deterrence in Alaska

The Firearms study included data from incidents where firearms were present and not used (although they did not count incidents where NO attempt to use the firearm was made). The reasons for firearm failure make it clear that firearm failures included many user errors where the firearm could not be fired. Considering that the spray study includes only sprayed bears we know that many of the reasons firearms were said to have failed could equally apply to spray. The firearms study further states:

Firearms failed to protect people for a variety of reasons including lack of time to respond to the bear (27%), did not use the firearm (21%), mechanical issues (i.e., jamming;14%), the proximity to bear was too close for deployment(9%), the shooter missed the bear (9%), the gun was emptied and could not be reloaded (8%), the safety mechanism was engaged and the person was unable to unlock it in time to use the gun (8%), people tripped and fell while trying to shoot the bear (3%), and the ﬁrearm’s discharge reportedly triggered the bear to charge that ended further use of the gun(1%).

The firearms study included “did not use the firearm” also “people tripped and fell while trying to shoot the bear” as well as ” the shooter missed the bear” and “the proximity to bear was too close for deployment” we know that there is significant data where the firearm was not used to actually shoot the bear, moreover these same types of failures could be applied to pepper spray, but are not included in the spray study because the pepper spray study only counts bear encounters where the bear was sprayed.

Secondly the studies indicate that the behaviors of the bears involved in the incidents were significantly different. It appears the firearms study includes mostly attack data, whereas the bear spray study is mostly food seeking and menacing behaviors.

From the firearms study:

However, interviews revealed that some people were hesitant to use lethal force for fear of shooting the person being attacked, or because they did not want to have to skin the bear and pack out its hide, skull, and claws as required by law. Additionally, some people admitted that they were reluctant to shoot a protected species. In some cases, this reluctance proved detrimental when split second decisions were required for the person to defend themselves from an aggressive, attacking bear. The decision regarding which deterrent to use is a personal one, but the consequences of attempting to use lethal force should be carefully weighed

From the above excerpts we know that the firearm study relies heavily on attack data.

From the bear spray study:

We analyzed 83 cases involving the use of bear sprays in Alaska (Table 1), of which 72 incidents involved persons spraying menacing bears, and the remainder (n ¼ 11) are examples of spray misuse or bear attraction to residues. We address instances of bear spray misuse separately.

… in 3 of these cases the bear attacked the person spraying.

It should be noted that the bear spray study indicates there were three injured people recorded in the study which is incidentally the same number of bear attacks included in the study.  It should go without saying but I’ll say it anyway, if you are attacked by a bear the likelihood you sustain an injury is high.

The problem with relying on the Bear Spray Study

To make the issue 100% clear, these two studies are not an apples to apples comparison of these two methods of bear deterrents. The bear spray study only deals with a statistically unusable three (3) cases of actual bear attacks out of the 72 encounters it includes in its study. On the other hand, the firearms study data includes what it calls bear-human conflicts. While we can’t know the exact circumstances of all the incidents, almost all of the firearms study data appears to be actual bear attacks. If you are interested in the subject, we recommend a novel approach. Read the studies. 😉

Bears are amazing majestic creatures, I think non-lethal deterrence is a great thing. The studies don’t tell us that guns are any better or worse than pepper spray. These studies show that spray and guns are appropriate for different purposes. To quote the oft touted internet slogan, “Get both!”  The pepper spray study clearly indicates that spray is great for menacing bears or bears looking for food. As far as attacks go, it doesn’t appear that the spray study really covers that, and the firearms study does show that firearms are effective against bears. I wish they were more effective, but you know what they say “Sometimes you eat the bear, sometimes the bear eats you.”

The term “menacing bear” is very ambiguous. Any bear that is close by or happens upon you unexpectedly is obviously a “menacing bear.” Having both bear spray and a firearm ready at hand is certainly the best option. If a bear is in your camp or close by looking for food it’s clear that you don’t want the bear to assume you or your trappings or belongings are a food source. Hence trying to deter the bear in this case MAY be the best course of action. But all situations are different. Please think about this in advance and use good judgement. Bear spray may be the appropriate way to deter the bear and get it out of your vicinity in the type of scenario where a bear is merely “menacing.” However, be ready to deploy a firearm because the study shows that if you are actually attacked the bear spray may not be effective. The firearms study does indicate that if used properly firearms, especially hand guns, are very effective (84%) against attacking bears.

Whatever you decided to do, be careful and be safe out there!

A rally the MSM doesn’t want you to see.